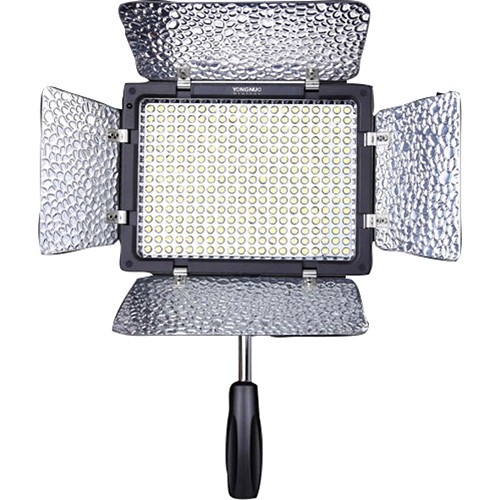 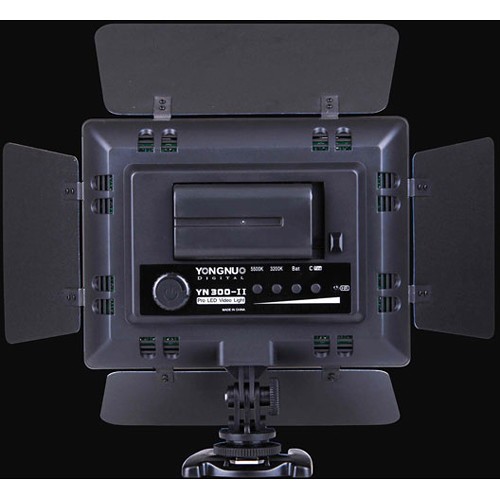 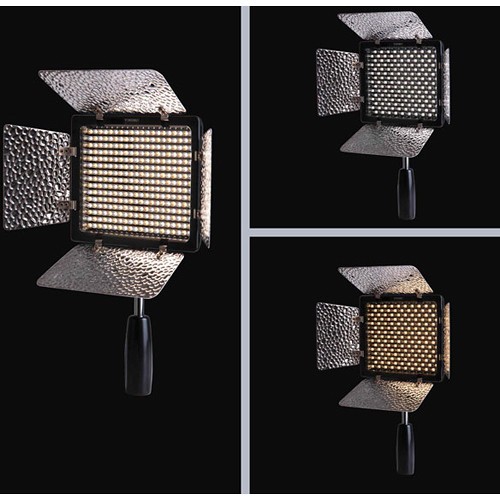 The 300-II LED Variable-Color On-Camera Light is one of a series of on-camera LED lights from Yongnuo Digital. This compact, 3200–5500K tungsten/daylight-adjustable unit offers two dimming modes (rough and fine), an IR remote control, four barndoors, a power-on/luminance adjustment knob, and four filter panels. Up to eight lights can be grouped via the IR remote control.

Designed to work with most DSLRs and small camcorders, the 300-II LED Variable-Color On-Camera Light can be powered using a Sony NP-F series battery (not included) or an optional AC adapter (not included). A push-button LED status bar shows the remaining battery power. A 5800mAh NP-F battery (not included) will power the light for up to 130 minutes. The 300-II LED Variable-Color On-Camera Light has three mounting options to your camera via a hot shoe, on a flat surface using the mini plate, or handheld using the included handle.

150 daylight and 150 tungsten–balanced LEDs, 3200–5500K variable color temperature
Barndoors, four filter panels, CT filters, remote control, and handle are included
Requires an L-series type battery (not included), or an optional 8V, 5A DC power supply (not included)
Included 8-channel IR remote control works up to 49′ away
Up to 130 minutes of runtime when using a 5800mAh NP-F battery (not included)
Push-button remaining battery-charge LED display
Mount directly onto a camera via the hot shoe, or use the mini-plate mount on flat surfaces
Power/luminance adjustment knob